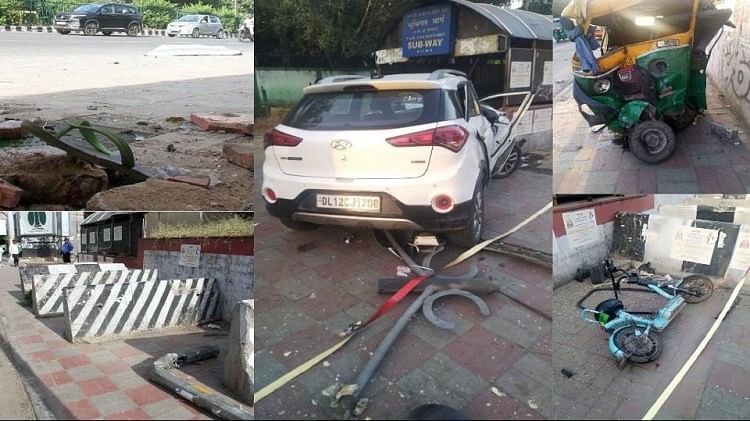 A major road accident has come to the fore on the Ring Road in front of the gate number two of AIIMS on Saturday night. The uncontrollable car hit the auto coming from the wrong direction. After this Yulu hit the cycle. Then the car hit the electric pole in a forceful way. The collision was so forceful that the electric pole broke down and fell 20 feet away. The car came to a halt after hitting the underpass wall. In this road accident, the auto driver, Yulu cycle and a young man in the car died.

Four youths in the car were injured in the accident. All have been admitted to AIIMS. The condition of the youth driving the car remains critical. The police handed over the body of the deceased car-riding youth to the relatives after conducting a post-mortem on Sunday. Kotla Mubarakpur police station of South district is investigating the matter.

According to South District Police officials, five youths Sandeep, Vineet (19), Harsh, Sandeep Yadav and Tauhid I-20 were going towards Safdarjung Hospital to eat parathas from Wazirnagar village of Kotla Mubarakpur and Khizrabad of New Friends Colony. Sandeep was driving the car and Vineet was sitting on the side seat. At 3.30 pm, when he reached the ring road in front of gate number-two of AIIMS, the auto was coming from the wrong direction. Due to the high speed, Sandeep could not control the car and hit the auto.

In this accident, auto driver, cyclist Nepali man Lal Bahadur (44) and Vineet sitting in front of the car died. The condition of Sandeep, who was driving the car admitted to the hospital, remains critical. The auto driver could not be identified till Sunday evening. On Sunday, the police handed over the body of Vineet to the relatives after conducting a post-mortem. Auto and car have been completely damaged in the accident.