Akhilesh Yadav Offers Keshav Prasad Maurya For Cm Post, Will The Government Change If 100 Bjp Mlas Switch Side – Up Politics 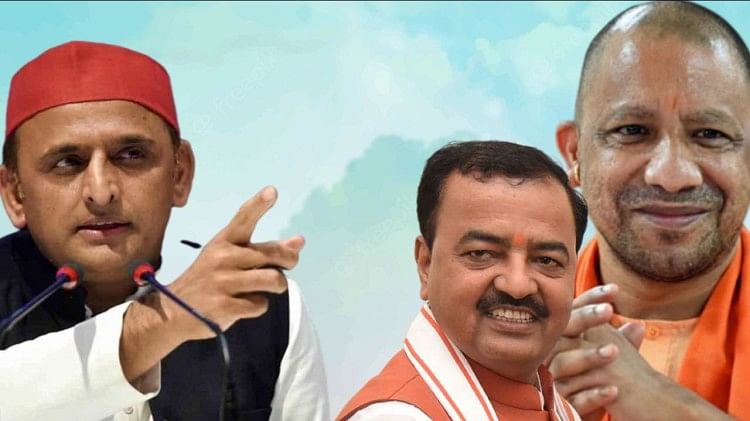 There is an earthquake of political statements in Uttar Pradesh. It started with the statement of Samajwadi Party chief Akhilesh Yadav. On Tuesday, while talking to a news channel, he offered to make the Deputy CM of the state Keshav Prasad Maurya as the Chief Minister after switching sides with 100 MLAs. Since then, many discussions have started in the political corridor.

Everyone wants to know is it possible? Can Keshav Prasad Maurya really become the Chief Minister by breaking 100 BJP MLAs? What is the political mathematics of Uttar Pradesh? Let’s understand…


Akhilesh Yadav was giving an interview to a news channel on Tuesday. During this, he made remarks about Deputy CM Keshav Prasad. He said, ‘Keshav Prasad Maurya is a very weak man. He had dreamed of becoming the Chief Minister. Even today, bring 100 MLAs. Hey take the example from Bihar, don’t they. Why don’t we do what happened in Bihar in UP? If they have guts and if they have MLAs with them. Once he was telling that he has more than 100 MLAs. Even today, bring MLAs, the Samajwadi Party will support them.

How did Keshav counterattack?


As soon as Akhilesh Yadav’s statement came, there was a ruckus in the political corridor. One after the other the statements of BJP leaders started coming. Keshav Prasad Maurya himself retaliated. Keshav Maurya said, ‘Akhilesh Yadav hates me. Everyone has seen Akhilesh’s love for me in the assembly. Akhilesh Yadav himself is about to drown, will he make me the chief minister?

Keshav did not stop here. He further said, ‘Akhilesh has become of feudal mindset. There is no party named Samajwadi Party. It’s a family party. There is no merit in his claim. BJP is such a strong party in itself, which does not need anyone’s support. The partners of our alliance are with us. Together with them we are running the government. He (Akhilesh Yadav) save his 100 MLAs. They are all ready to join BJP.

Now understand if 100 BJP MLAs break, can the government be changed?


To understand this, we spoke to senior journalist Pramod Kumar Singh. He said, ‘Akhilesh Yadav’s statement is political. Sometimes, if the arrow is shot in the dark, the target is also hit. Akhilesh has also tried to do something similar. Meaning he is trying to bring turmoil inside the BJP. He also knows that it is very difficult to break 100 MLAs at the moment, but still he started the round of political discussions by making this statement. This is a kind of psychological game. Which the SP chief is trying to play.

Pramod has further tried to tell through statistics that what will happen if 100 MLAs break away from BJP? Pramod says, “The BJP-led NDA currently has the support of 272 MLAs in UP, which has 403 assembly seats. In this BJP alone has 254 members. Apart from this, 12 members of Apna Dal (S) and six members of Nishad Party have got the support. At the same time, the Samajwadi Party-led opposition has the support of 119 MLAs. This includes 111 MLAs of the Samajwadi Party and eight from the RLD. Suheldev Bharatiya Samaj Party has recently parted ways from the SP alliance. Suheldev Bharatiya Samaj Party has the support of six MLAs.

According to Pramod, if 100 MLAs separate from the BJP, the total figure for the members of the SP alliance together is 219. The majority figure is 202. At the same time, the BJP-led NDA will have 172 MLAs left. Meaning in such a situation, Akhilesh Yadav will have more MLAs than the majority and he will be in a position to form the government.

However, still the government will not be able to form. That’s because it has a big screw. That is, action will be taken against the 100 MLAs who break with the BJP as per the anti-defection law. Meaning they can be subscribed. This is because if less than two-thirds of the MLAs of any party break, then action can be taken against them under this law. BJP currently has 254 MLAs. In such a situation, to avoid the anti-defection law, not 100, but about 170 MLAs of the BJP will have to switch sides. It is clear that even if 100 MLAs break from BJP, it is not possible to change the government.