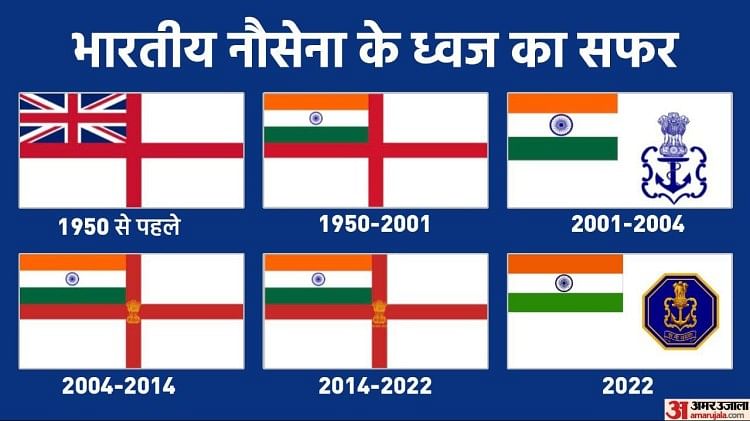 The Indian Navy got a new insignia. The Red George Cross has been removed from the Navy’s flag. Apart from this, the Ashoka Pillar is shown in the emblem of the Navy. Sanskrit mantras have also been included in this. Prime Minister Narendra Modi on Friday dedicated the new flag and symbol to the nation.

Let us know how much change has happened in the flag of the Navy since independence and what is its meaning?

When did the Navy flag change?

The word Royal was removed from the Royal Indian Navy on 26 January 1950. It came to be known simply as the Indian Navy. Before independence, the British flag remained in the upper corner of the naval flag. Instead of which the tricolor was given place. Apart from this, there was also the sign of the cross. The cross in the flag was the symbol of St. George.


The flag of the Indian Navy was changed for the second time in the year 2001. At that time the Navy anchor was replaced by removing the George Cross in the middle of the white flag. The tricolor was kept intact at the top left corner. There was a long pending demand for a change in the Navy’s flag, with the original suggestion for the change coming from Vice Admiral VEC Barboza.


However, in 2004, the flag and emblem were again changed. The Red George Cross was again included in the flag. It was then said that the mark was not clearly visible due to the blue colour. The new change included the national emblem Ashoka Pillar in the center of the red George Cross.


It changed again in 2014. Then Satyamev Jayate was written below the national emblem in Devanagari language. Now it has been changed again. Once again the Red George Cross (two red stripes) has been removed from the flag. Along with this, the emblem of Navy has been included in it. The national emblem Ashoka Pillar has been included in the new emblem. It depicts a lion roaring. Sha no Varun: is written below. It means that Varuna, the god of water, be auspicious to us.