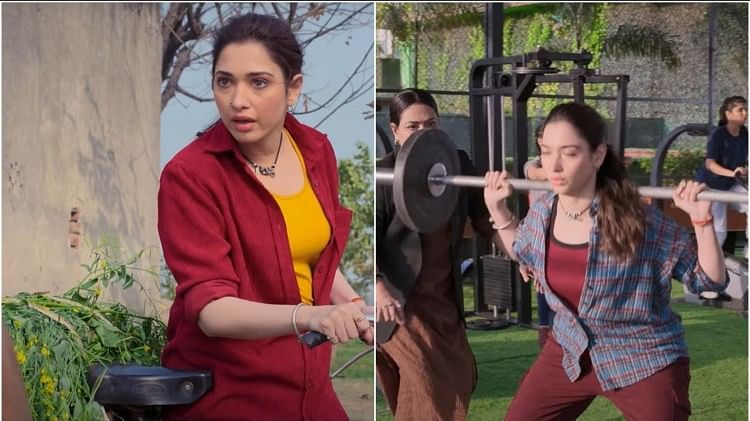 Actress Tamannaah Bhatia, popularly known as ‘Milk’ in South Indian cinema, is making another attempt to establish her foot in Hindi cinema with the film ‘Babli Bouncer’. His director is Madhur Bhandarkar. Madhur has given films like Sanjeevani to many actresses of Hindi cinema as a director. But, her Midas touch is lost somewhere these days, in such a situation, how much Tamannaah Bhatia gets benefit from Madhur’s new film ‘Babli Bouncer’, which is going to be released directly on OTT, it will be a matter to be seen.

Tamannaah Bhatia started her career in the year 2005 with the Hindi film ‘Chand Sa Roshan Chehra’. People do not even remember when the film came, and when it landed. After this she stepped into the industry of South and soon she became a star actress there. In many of her interviews, Tamannaah has revealed that she will get real success only when she becomes a successful actress in Hindi films as well.

Seeing the popularity of Tamannaah Bhatia in South’s films, director Sajid Khan took her as a heroine with Ajay Devgan in ‘Himmatwala’ in the year 2013. The film was a remake of Sridevi and Jitendra’s film ‘Himmatwala’ released in the year 1983. The film was a flop. In the year 2014, his another Hindi film ‘Humshakals’ flopped. After this, Akshay’s support in ‘Entertainment’ also did not work for him. Director Vijay’s Tamil, Telugu and Hindi film ‘Tutak Tutak Tutiya’ also flopped. Her last identity is still made as the heroine of the Bahubali series, on whose body the Bahubali tattoo is engraved.

After the success of ‘Bahubali’, it was expected that the doors of Bollywood would open for Tamannaah Bhatia and she would come in the eyes of big makers, but nothing like this happened. In the South, more than one film was becoming a super hit and in Bollywood, Tamannaah’s Tamanna could not go beyond films like ‘Bole Chudiyan’ and ‘Chor Nikal Ke Bhaga’. Meanwhile, Madhur Bhandarkar cast her for his film ‘Babli Bouncer’. It can be guessed how a heroine known as Milk will look on the screen doing boxing.

‘Babli Bouncer’ is produced by Star Studios. If the film was not found theater worthy, the makers announced to release it on their home OTT Disney Plus Hotstar on 23 September 2022. This is the story of a town near Delhi where every house has a bouncer. Tamannaah Bhatia says, ‘This is a character which I have never played before. Generally men choose this type of profession. I am very thrilled to give such an unusual character to the audience.