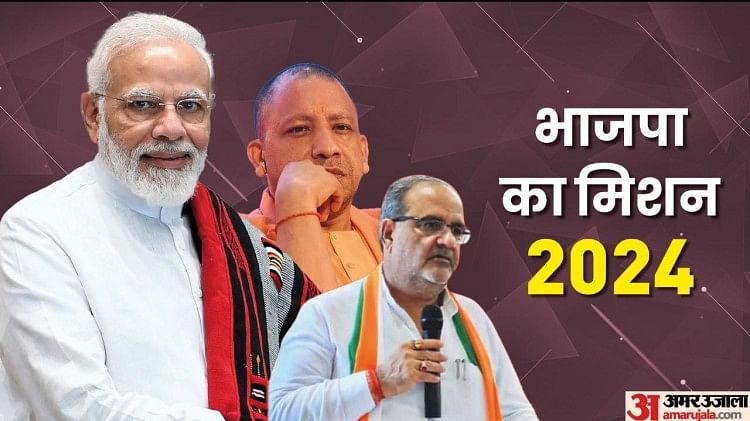 In the 2024 Lok Sabha elections, BJP is claiming to win all 80 Lok Sabha seats in Uttar Pradesh. Be it Chief Minister Yogi Adityanath or Deputy Chief Minister Keshav Prasad Maurya and BJP state president Bhupendra Singh Chaudhary, all have said so.


How is BJP claiming to win 80 seats?

The results of three seats are the most important reason behind this. These seats are Azamgarh, Rampur and Amethi. It was once a stronghold of SP and Congress. At present, all three are occupied by the BJP. In Amethi where BJP got victory in the 2019 Lok Sabha elections. Where Rahul Gandhi had to face defeat. At the same time, in the recently held by-elections in Rampur and Azamgarh, the BJP snatched these seats from the SP. Now the party has set a target to win seats like Mainpuri, Rae Bareli as well.


How will the goal of BJP be fulfilled?


To understand this, we talked to a veteran leader of UP BJP. “The party has already started working for the 2024 Lok Sabha elections. There are three main points of this planning.

1. Focus on Lost Seats: The seats where the BJP had lost in 2014 and 2019 have been reviewed. The reason for the victory of the opposition in these seats was due to the caste and religious factor as well as the face of the opposition. This time BJP is focusing on all those seats from now on. In the coming times, caste, religious equations will also be straightened out. Central ministers, state government ministers will have maximum visits to these seats. Every problem of the local people will be resolved and they will be informed about the working of the government.


3. More focus on these voters: According to the review done by the party after the results of 2019 and then 2022 elections, the BJP needs to catch up among Yadav, Jatav, Muslim voters. For this, BJP has entrusted the responsibility to different leaders.

This can be gauged from the fact that on July 25, when President Draupadi Murmu was sworn in, Prime Minister Narendra Modi addressed the death anniversary of Harmohan Yadav, despite the busy schedule. Harmohan Yadav was a strong Yadav leader of UP.

There has been speculation for a long time that BJP may also bring Shivpal Singh Yadav along to make Yadav voters in its favour. Mulayam’s daughter-in-law Aparna Yadav has already joined the BJP before the assembly elections. In the state government, this time the MLA of Jaunpur, Girish Yadav has again been made a minister of state with independent charge.

At the same time, BJP has put forward Baby Rani Maurya to cater to Jatav voters. Baby Rani Maurya comes from Jatav community. This is the reason that just before the assembly elections, he was removed from the post of Governor of Uttarakhand and recalled. Now he is also a minister in the UP government.