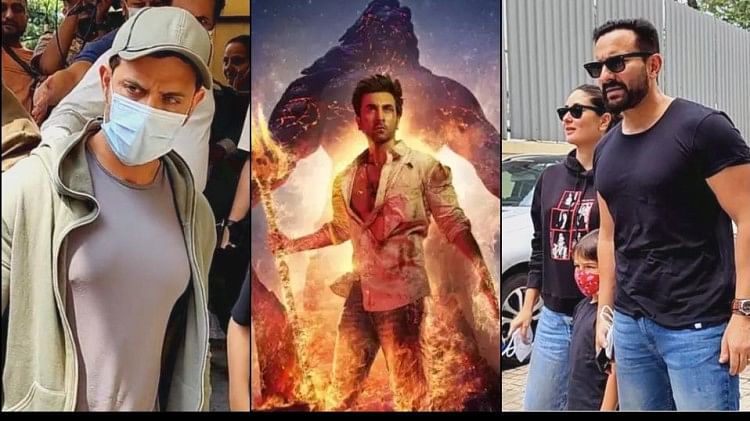 Bollywood’s most awaited film ‘Brahmastra’ has been released. Ayan Mukerji has spent a full 10 years to make this film and its cost is also being told not small but about Rs 400 crore. Adorned with actors like Alia Bhatt, Ranbir Kapoor, Amitabh Bachchan, the film gave a bumper opening on the first day. This film is getting good special response from the audience. At the same time, Bollywood stars also reached the theater to see this film on the very first day.

After the release of ‘Brahmastra’, Saif Ali Khan came to watch the film with his wife Kareena Kapoor and son Taimur. During this, Saif and Kareena were seen tweening in black outfits. Kareena Kapoor wore denim with a black hoodie and Saif Ali Khan was seen in denims with a black T-shirt. Apart from Saif and Kareena, Hrithik Roshan also accompanied his two sons to watch the film.

Varun Dhawan was also waiting for the release of ‘Brahmastra’ and that is why he also came to see this film on the first day. Apart from Varun, Arjun Kapoor was also spotted outside the theater after watching the film. He looked handsome as ever in a purple shirt. Apart from these, Anshula Kapoor and Sonali Bendre’s husband Goldie Behl accompanied their son to watch the film.

Let us inform that even after the release, the advance booking of ‘Brahmastra’ is going on in full swing. According to the opening figures of the first day, the net collection of the film has been Rs 36 crores and the gross collection was Rs 43 crores. At the same time, the film’s debut in Hindi is better than other languages ​​and it has been successful in earning 32.50 crores. Apart from this, the film has done a business of 4 crores in Telugu. In such a situation, it seems that the sinking Naya of Bollywood will now get the support of ‘Brahmastra’.