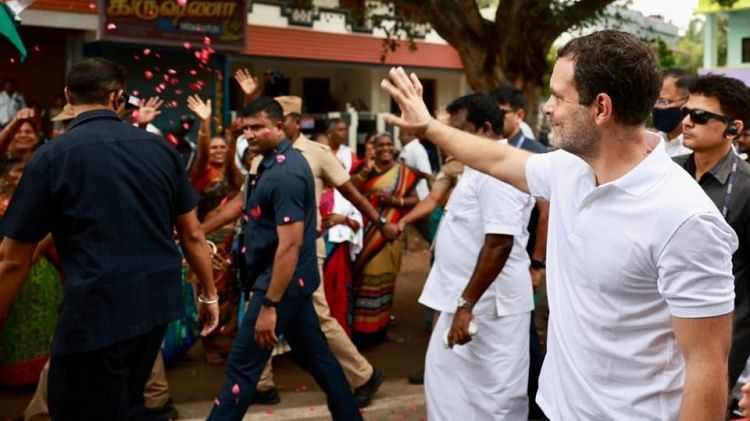 Former Congress President Rahul Gandhi along with several senior leaders duly started the ‘Bharat Jodo’ Yatra from Kanyakumari on Thursday morning. The party is describing this yatra as a massive public relations campaign and is hoping to bring life to the organisation. Rahul Gandhi started the padyatra from Vivekananda Polytechnic along with 118 other Bharat Yatris and many senior leaders and activists. The party has named 119 leaders, including Rahul, “Bharat Yatris” who will travel from Kanyakumari to Kashmir on a padyatra. These people will cover a total distance of 3570 kms.

Let us inform that the Congress had formally started its ‘Bharat Jodo’ Yatra from Kanyakumari on Wednesday and on this occasion, party President Sonia Gandhi had said through a written message that this visit is a transformative moment for Indian politics and this Congress Will serve as a lifeline for Former party president Rahul Gandhi had targeted Prime Minister Narendra Modi, the Bharatiya Janata Party and the Rashtriya Swayamsevak Sangh and alleged that the tricolor is being attacked at present.

Rahul Gandhi attends a prayer meeting at the memorial of former Prime Minister Rajiv Gandhi in Sriperumbudur, before starting the ‘Bharat Jodo Yatra’. It was here three decades ago that Rajiv Gandhi was assassinated in a suicide attack. After attending a prayer meeting organized at his father’s memorial, the former Congress president had attended an event in Kanyakumari where Tamil Nadu Chief Minister MK Stalin handed over the national flag to him.

Before starting the yatra, Rahul Gandhi also visited Vivekananda Rock Memorial, Thiruvalluvar Statue and Kamaraj Memorial in Kanyakumari. The padyatra will reach Kerala on September 11 and travel through the state for the next 18 days to reach Karnataka on September 30, and then move northwards to other states.