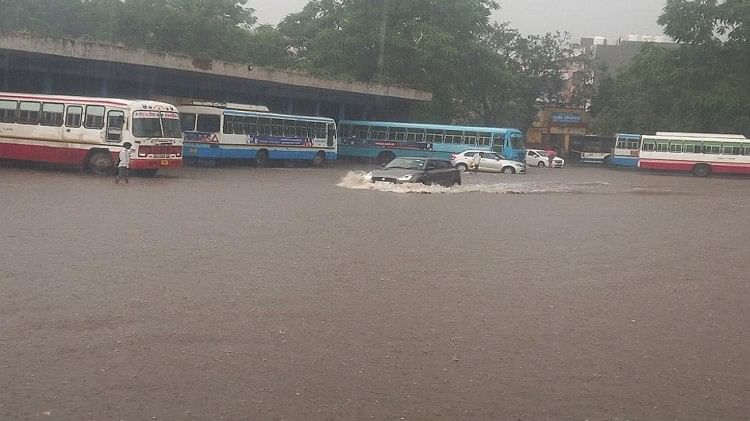 The city of dreams, which has become globally recognized, became a water village in just 95 mm of rain. After the rain, the whole city is in bad condition due to water logging and jam. From sectors to colonies and big societies, there is water. Underpasses built for smooth traffic at major squares and intersections of the city are also submerged by spending crores of rupees. Seeing the deteriorating condition of the city, the team of GMDA and Municipal Corporation was engaged in relief and repair works throughout the night. Even after this the situation did not return to normal in many areas. After the hard work of GMDA employees, there was relief from waterlogging in some parts.

Many social media users have given new names to the city on the condition of the city after the rains. Some called Jalgram and some called floating Gurugram. Some people did not even hesitate to take a jibe at the chaos. This Dussehra Ravana will not burn, will drown and now Bollywood will prepare for the film floating Gurugram after Udta Punjab…

After the rains, the figures released by the administration amidst the problems of water logging all around the city are enough to show that the normal rains showed the picture of administrative mismanagement in the city. The administration has released the average rainfall figures of 95.5 mm in overall Gurugram within two days. Although less and more rain has been recorded at different places, but its average is only 95.7 mm.

The warning issued by the Meteorological Department for a week was not taken seriously by the top officials of Gurugram and submerged the city. It is true that there was no possibility of such rain at the time of departure of monsoon, the data is also showing that the rain was normal. Now the question arises that why the drainage system of Gurugram could not be repaired even after wasting crores of rupees for many years?

Vehicles crawling all day on the highway

Vehicles kept crawling throughout the day on the Delhi-Jaipur highway. Traffic remained sluggish throughout the day on the highway due to waterlogging and span load test on one side of Hero-Honda Chowk flyover. It took people 15 to 20 minutes to cover another one or two kilometers. The effect of slow traffic was from Delhi border to Manesar IMT. Along with the highway, there was a traffic jam on the under-construction Gurugram-Pataudi. People also faced difficulty in reaching Delhi area from Palam Vihar towards Najafgarh. The road going from Gurugram to Najafgarh was waterlogged. Traffic remained very slow on many internal roads including Basai to Dhankot, Sohna Chowk to Basai Road.