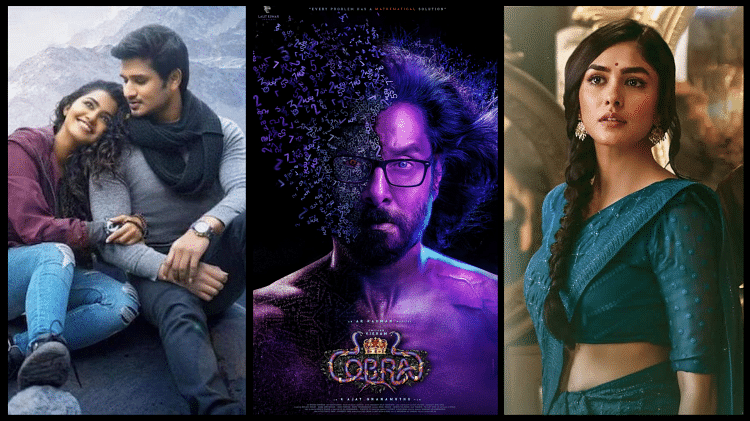 South Superstar’s reign continues at the box office. On one hand where Nikhil Siddharth and Chiyaan Vikram are already dominating the box office. On the other hand, Mrunal Thakur and Dulquer Salmaan’s ‘Sita Ramam’, after creating a ruckus at the Tamil, Telugu and Malayalam box offices, has now entered the Hindi box office. The film, which released on Friday, had a disappointing opening day itself. The film has not been able to cross the one crore mark on its opening day itself. On the other hand, apart from Cobra and Kartikeya 2, any other big film failed to do well on Friday. Here’s a look at each film’s earnings…

The condition of Vijay Deverakonda’s first Bollywood film has been worse than Aamir Khan’s ‘Lal Singh Chaddha’. Yes, ‘Liger’, which released in theaters in five languages ​​on August 25, is barely earning money. This is the reason that on the ninth day this sports drama film has collected only 50 lakh rupees in five languages ​​across the country. Along with this, the film, directed by Puri Jagannath, has been able to do a total business of Rs 40.58 crore within nine days.

The collection of Chiyan Vikram’s film Cobra seems to be falling for the third consecutive day. On the first day, where Chiyan’s film did a business of Rs 17.45 crore. On the second day, it had earned Rs 5.15 crore, a decline of 70 percent. At the same time, according to the figures coming out, the film has collected only Rs 3.70 crore on the third day. Along with this, Chiyan Vikram’s film has earned a total of Rs 26.30 crore within three days.

South actor Nikhil Siddharth’s film ‘Karthikeya 2’ has become one of the biggest blockbuster hits of the year. The film, which gave a tough competition to big budget films like ‘Lal Singh Chaddha’, ‘Raksha Bandhan’ and ‘Liger’, has crossed the Rs 100 crore mark at the worldwide box office. Talking about the performance of the film at the Indian box office, even on the 21st day, Nikhil Siddharth’s film is collecting more than one crore rupees. With this, the earnings of ‘Karthikeya 2’ have crossed Rs 77 crore.

Dulquer Salmaan and Mrunal Thakur’s film proved to be a blockbuster in the South, did not show anything special at the Hindi box office. Made at a cost of 30 crores, this film has collapsed on its opening day itself. According to preliminary figures, the film, which released in Hindi language on September 2, has done a business of around Rs 70 lakh on the first day.