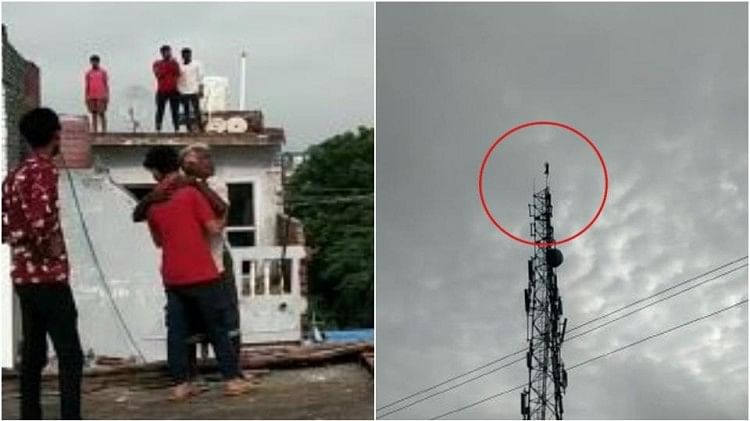 On the occasion of Vijayadashami in Karhal, Mainpuri, on Wednesday morning, a youth named Naushad climbed the mobile tower located near Ramlila Maidan. Seeing the young man climbing the tower, the people around gathered. As soon as the information was received, Tehsildar Abhayraj Pandey reached the spot along with the police force. Naushad, who describes himself as a Hanuman devotee, put such a condition, which led to a strange situation. He said that he would not come down from the tower until Hindus and Muslims hug each other. Accepting the condition of Naushad, the Tehsildar called Hindu and Muslim youths and hugged them. After fulfilling the condition, Naushad came down from the tower. After this people heaved a sigh of relief. It is said that Naushad has climbed the tower before.

Also read- Yeh world, this gathering, not of my use: a drunken youth climbed the tower, started singing, there was a stir in the village

Naushad is a resident of Mohalla Fakiran of Karhal. He calls himself a devotee of Hanuman ji. He says that despite being a Muslim, he believes in Hinduism. He also worships gods and goddesses according to Hinduism.

According to Naushad, he had become addicted to drugs. Showed from doctor to quack, but to no avail. Someone advised to go to Mota Mandir. When he went there, he got rid of his drug habit. There was a change in his life, so he started worshiping Hanuman along with his wife.

He says that everyone’s master is one, only human beings discriminate. People of all religions should live in harmony. On Wednesday, Naushad climbed the tower to embrace Hindu-Muslim. When the Hindu-Muslim youth hugged, he got down.