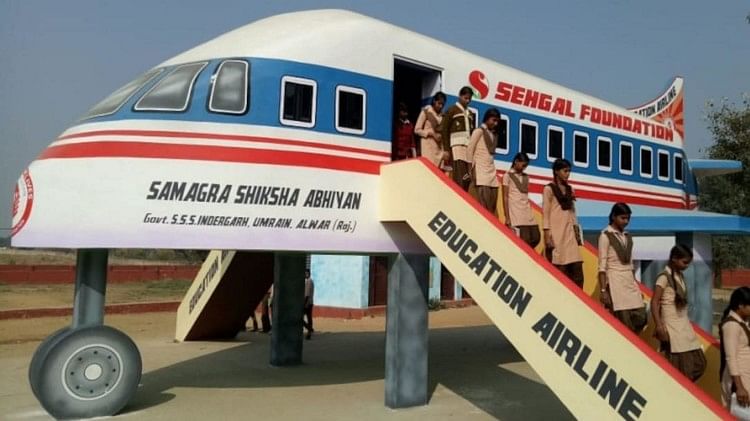 In Alwar district of Rajasthan, new efforts are being made to connect children with education. Schools are being made attractive so that children come to school happily. From the pictures of books, pencils on the walls to selfie points and bottle shaped water tank in the school, the students are all enthralled. The model of government school in Alwar is becoming so successful that the urge to read and learn has increased in the children.

As a result of the transformation and rejuvenation of government schools, admissions in schools have doubled in the last two years. At the same time, the desire to learn has increased in the children. With this, they have started living in more discipline than before. Only one government school of Alwar is not visible, but the models of most of the government schools in Alwar have become a topic of discussion. With the contribution of donors and the help of various organizations other than the state, many government schools in Rajasthan have attracted people with their unique designs.

Kiran, principal of Government Senior Secondary School in Sahodi village, said that when I took over, the school building was not in a good condition. I believe that the school building should be attractive. Hence the walls were painted attractively and the water tank has been made in the shape of a bottle. The stairs are also designed in such a way, which helps the children to learn.

Teacher Kiran says that there is also a selfie point in the school. Selfie Point attracts students and inspires them to fly higher by planting wings of education. 40 lakh rupees were spent on the renovation of the school by the Sehgah Foundation and the villagers also contributed in this. Enrollment almost doubled. This step of ours has helped in creating an environment of learning, discipline and cleanliness.

In a school, classrooms look like a train compartment, the walls of which are painted blue. Rajesh Lavania, an engineer of the education department posted in Alwar, said that while there has been a significant jump in the enrollment of students, it has also affected the studies. There has also been a positive change in the matter of discipline and cleanliness.