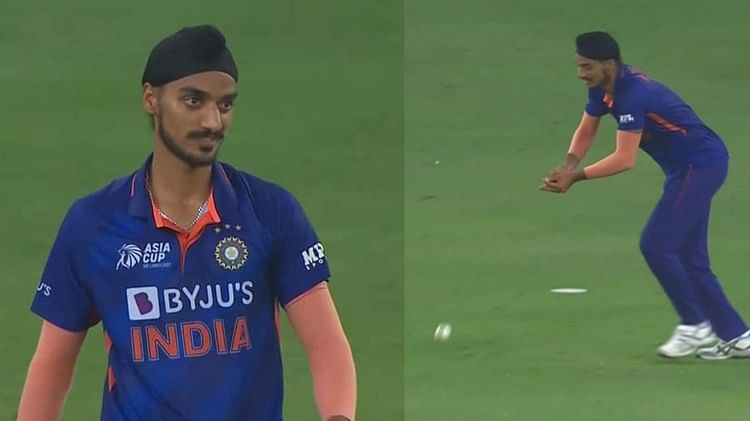 After the defeat at the hands of Pakistan in the Asia Cup, the matter of linking the name of Mohali cricketer Arshdeep Singh with Khalistan has become hot. In the 18th over of the match, Arshdeep missed the catch of Pakistani player Asif Ali, after which he was trolled a lot on social media. Apart from the family members, other players are hurt by Arshdeep being targeted and have stood in his support. He says that people should see the game as a game and respect the players. Sports and any sportsperson should not be targeted on the basis of country and religion.

Arshdeep’s profile on Wikipedia is being tampered with and pictures are being viral on social media. It has been found in the investigation that this act has happened from the Punjab province of Pakistan. Earlier in the year 2018, Arshdeep’s profile was tampered with and he was described as a member of Khalistani team. Even then this act was done by a Pakistani citizen. Let us inform that Arshdeep has also been a member of the team that won the Under-19 World Cup.

My son will answer critics with his performance: Baljit Kaur


Arshdeep’s mother Baljit Kaur, who returned to Chandigarh from Dubai at 5 pm on Monday, told reporters that Arshdeep may be being trolled on social media but people across the country are supporting him. We feel bad about the kind of words being used on social media for the son but we have told our son that he has to answer them with his performance. Baljit Kaur said that fans are the capital of a player. In such a situation, people should have a big heart and show sportsmanship. Losing and winning are two sides of the coin in the game. Many times there are matches when there is a lot of pressure on the player, then only the fans encourage. Critics should think that when it has performed well, there may be some mistakes. These things hurt the sentiments of the players as well as the parents.

Baljit Kaur told that on Sunday she watched the India and Pakistan match with the family sitting in the stadium. We also feel sad when the catch is missed, but the one who does better in the game wins, it is not right to target a player in this. Said that he has told Arshdeep to move forward with a positive mindset and perform better.

Many former players supported him by putting Arshdeep’s photo on their social media accounts. Everyone said that there should be no individuality in sports. Big players make mistakes under pressure. In such a situation, we should introduce sportsmanship.

Players’ morale falls due to such an act: Harish Sharma

City’s senior cricket coach Harish Sharma said that missing catches or miss fielding is a part of cricket match. When this happens, the trend of trolling players is wrong. This lowers the morale of the player. The support of the fans is what encourages the player to do better every time. People start trolling on social media as soon as they see each other, but no one thinks how much difference it will make on the performance of the player.