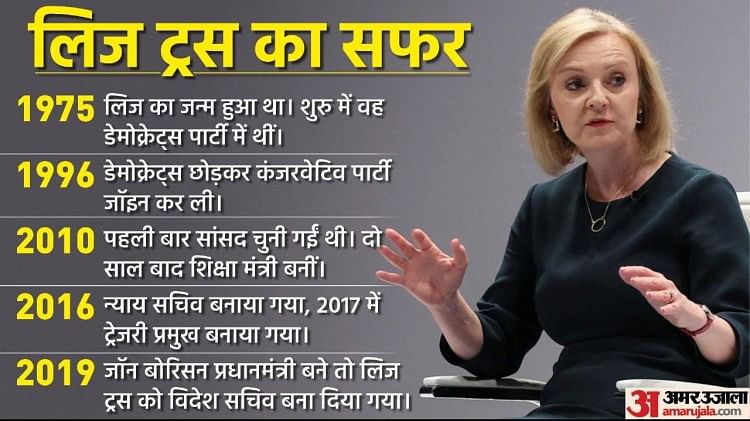 The life of Liz Truss, who is being told further in the claim for the post of Prime Minister of Britain, is also very interesting. Truss is currently Britain’s foreign secretary. Studied in a government school, 47-year-old Truss’s father was a mathematics professor and mother a nurse. Coming from a pro-Labor family, Truss studied philosophy, politics and economics from Oxford.

After completing his studies, he also worked as an accountant for some time. After that she got into politics. He won the first election as a councillor. The family was a supporter of the Labor Party, but Truss liked the ideology of the Conservative Party. Truss is considered a staunch supporter of the right wing.

Truss was elected MP for the first time in 2010. Truss was initially against the issue of leaving the European Union. However, later came out in support of Boris Johnson, who emerged as the hero of Brexit. The British media often compares him to former Prime Minister Margaret Thatcher.

Let us know the full story of Truss. How did he catch the Conservative Party by being born into a family that supported the Labor Party? How was his political career?

Liz Truss’s full name is Mary Elizabeth Truss. He was born on 26 July 1975 in Oxford, England. Father was John Kenneth and mother Priscilla Marie Truss. His father was a mathematics professor at the University of Leeds, while his mother was a nurse. When Truss was four years old, her family moved to Scotland. Here he did his early studies. After a few years, she shifted to Canada. In 1996 Truss studied Philosophy, Politics and Economics from Merton College, Oxford.


Truss was the leader of the Liberal Democrats in college

While attending Merton College, Truss campaigned for the Liberal Democrats party. She has also been the chair of the Oxford University Liberal Democrats. Apart from this, she was also a member of the National Executive of Liberal Democrats Youth and Students. As a student leader, Truss also campaigned extensively for the Labor Party. However, after graduation, that is, in 1996, he left the Democrats and joined the Conservative Party. Since then he is in this party.

From 1996 to 2000, Truss worked as an accountant for Shell. He has also worked in the UK telecommunication company Cable & Wireless. In this company, she reached the position of economic director. He left the company in 2005. Truss also contested the Greenwich London Borough Council elections in 1998 and 2002, although they were defeated in both. On May 4, 2006, he won the first election as a councillor. After this, in 2010, she was elected MP for the first time.


It is said that when she was contesting for MP, her father refused to campaign because Truss was from the Conservative Party and he preferred the Labor Party. Although the mother certainly campaigned for the truss. Two years after becoming an MP, she also became the Minister of Education. As education minister, he did many great things. A survey was conducted, in which it was found that by the age of 18, only 20 percent of British students are able to read mathematics. In such a situation, he made maths compulsory for full-time children. In 2014, he was made the Environment Minister.