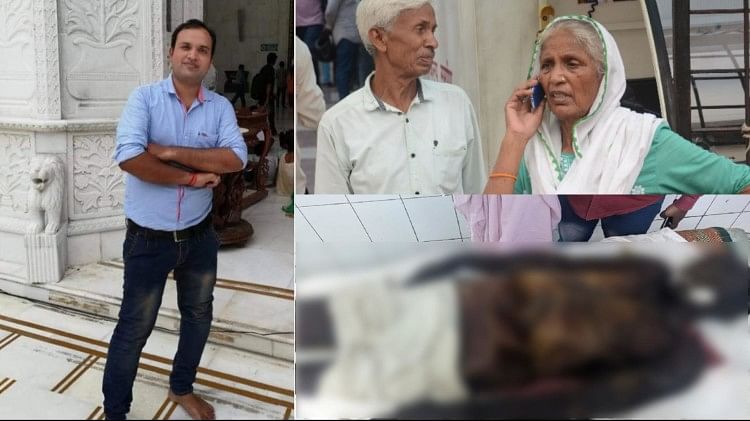 In Krishnapuri Roshan Nagar of Rawatpur police station area of ​​Kanpur, a family was living with the body of an income tax officer for one and a half years. The matter came to light when the Health Department team reached his house on Friday. Police have taken the body in possession and sent it for post-mortem. However, the relatives refused to conduct the post-mortem of the body on Friday evening. Due to which the police handed over the body to the relatives after paperwork. The family performed the last rites in the presence of the police late in the evening at the electric crematorium at Bhairav ​​Ghat. According to the information, Ram Autar, a retired employee from the Ordnance Factory, lives with the family in Roshan Nagar. The youngest of three sons, Vimlesh (35) was in the post of Assistant Accountant Officer (AAO) in Income Tax in Ahmedabad. Vimlesh’s wife Mitali is working in a cooperative bank located in Kidwainagar.

Father Ram Autar told the police that Vimlesh Corona got infected on 18 April 2021. The family had admitted him to Moti Hospital on Birhana Road, where he died on 22 April during treatment.

Ignoring the Kovid rules, the hospital management handed over the body of Vimlesh along with the death certificate to the relatives. After coming home, the family members were preparing for the last rites, when mother Ram Dulari refused to perform the last rites, saying that Vimlesh’s heartbeat was coming.

Since then the parents were taking care of his body by keeping it in a room of the house. Apart from Vimlesh’s wife Mitali, Vimlesh’s brothers Sunil, Dinesh’s family are also living at home.

Parents said – our son is alive


Our son is in this condition for one and a half years. We have not applied any chemical on his body. If water used to come out somewhere in the body, then they used to clean it with Ganges water. It smelled bad for a few months in the beginning, but after a few months the smell stopped. Our son is alive… Vimlesh’s father Ram Autar and mother Ramdulari said this when the health department team reached their house.