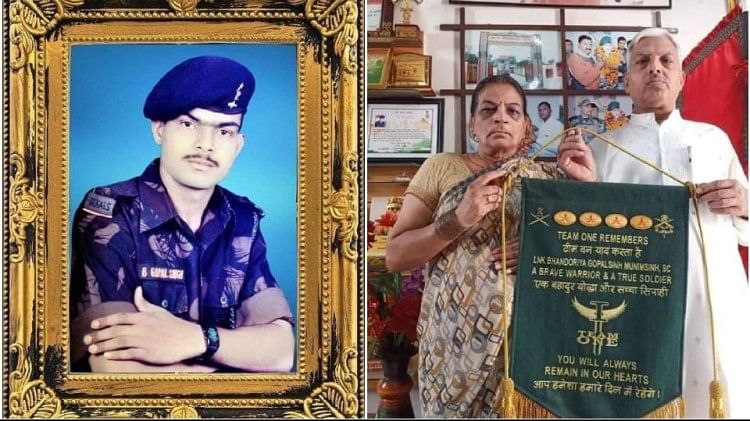 Lance Naik Gopal Singh Bhadauria, son of Mukim Singh Bhadauria, originally a resident of Purtal (Kenjra) village, was also awarded the Vishisht Seva Medal for bravery in the 26/11 terrorist attack in Mumbai as an NSG commando. He brought the injured Subedar Major out of the Taj Hotel amidst the firing of terrorists.

At the age of 33, Lance Naik Gopal Singh killed four terrorists during an encounter in Kulgam, Jammu and Kashmir on 12 February 2017. Lance Naik was also martyred in the encounter. In 2018, it was decided to give Shaurya Chakra to the brave son.

The parents who were waiting to receive the Shaurya Chakra at the hands of the President were swindled on September 5 when the Shaurya Chakra reached their Bapu Nagar home by post. The parents told that they are proud of the martyrdom of their son. The memory of the son has been saved by making martyr memorials in Ahmedabad and Kenjra. Looking forward to the day when the President will bestow this honor with his own hands.

Gopal Singh Bhadauria got divorced from his wife Hemavati in the year 2011. There was a dispute in the house regarding the right of Shaurya Chakra and the matter reached the court. The court accepted the side of the parents of the martyr and stayed the giving of Shaurya Chakra to Hemavati. The court ordered the central government that posthumously the honor and facilities of the martyr should be given to his parents. The award was sent by post on September 5.