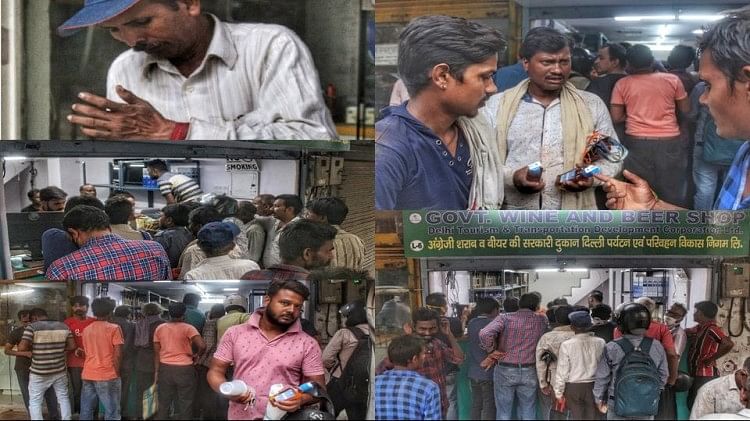 The lovers of liquor once again started spilling the jam by buying liquor from the government shop. In Delhi, liquor shops run by four corporations have started opening in its place by closing all private contracts. On the first day many shops in the area were decorated with flowers and garlands. In fact, the sellers opened their shops by worshiping duly. However, people had to face a lot of trouble in finding their favorite brand and liquor shop. Many wine connoisseurs were also upset that they had to be deprived of the exemption they were getting.

The controversial Excise Policy 2021-22, surrounded by allegations of corruption, has been withdrawn. After the uproar over the new excise policy, liquor shops started opening from Thursday under the old excise policy. 400-500 liquor shops will open this week. On the first day also, more than 300 shops opened in Delhi and liquor was sold. The government is preparing to open more than 700 shops in Delhi by the end of this year.

Officials of the Excise Department said that these shops will open in the entire city except the non-conforming areas. Licenses have also been issued to shops in shopping malls. The Excise Department will soon launch an app so that people can know the location of contracts nearby and their opening and closing times.

The old excise policy has been restored but on the first day people had to wander for the brand of their choice. The Excise Department has put up around 360 brands of alcohol for sale. Of these, close to 230 include foreign brands. It has been made mandatory in most of the shops to sell in 300 square feet space.

Now a free bottle on a thing of the past

Delhi has returned to the old excise policy. Therefore, now the exemption given by private sellers on liquor has also ended. People did not get the benefit of other discount schemes including one free on one bottle, two on one free. Excise department officials said that in the initial days, customers may face some problems. But the supply of liquor and availability of the brand will improve in the coming days. There is a stock arrangement of more than 40 lakh liquor bottles.

what people say on this system


The reaction of the common people to the new system of liquor is different. Satyendra Chaturvedi, a resident of Mukherjee Nagar, expressed regret over not getting the preferred brand. Said that when private shops were open, there was more convenience. There were many different brands. On the other hand, Akshay Kumar said that there is more trust in the government shop. Death is usually reported from intoxicating liquor. At least the faith will remain. Alcohol is expensive. It is of course that one will have to struggle to enter a small shop and buy it. Another said that drinking beer will now cost more. Cane beer was also cheaper because of the discounts in private shops.

Former wine shop zonal officer of Delhi Tourism Department VK Jatav said that there was some chaos on the first day. But all the employees of the corporation are skilled, soon the problems will be solved. All are well versed in operating the shops. Shops also opened and sold well. People’s confidence in government shops has increased.