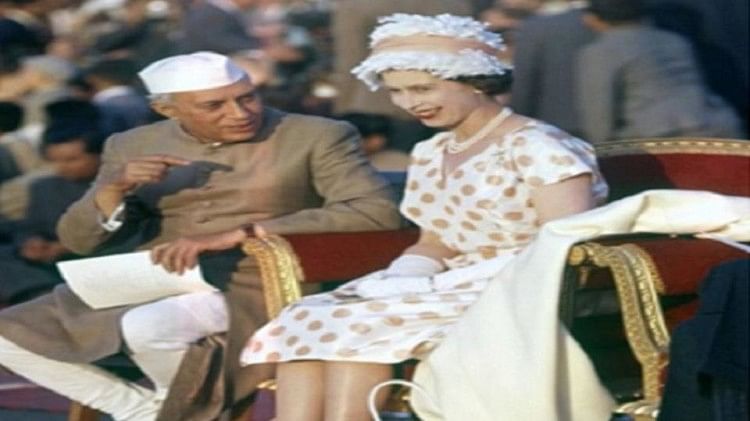 Britain and Queen Elizabeth II have had close ties with India. She had visited India thrice during her queenly period of 70 years. He also had meetings with the country’s first Prime Minister Pandit Jawaharlal Nehru to Indira Gandhi and IK Gujral and contemporary Presidents Dr. Rajendra Prasad, Giani Zail Singh and KR Narayanan. PM Narendra Modi met him in London in 2018.

Queen Elizabeth visited India for the first time on 21 January 1961. The then PM Pt. Jawaharlal Nehru and the then President Dr. Rajendra Prasad had come to welcome him at Palam Airport in Delhi. She had come to attend the Republic Day parade at the invitation of Dr. Rajendra Prasad. Her husband Sh. Prince Philip also came. Apart from Delhi, the royal couple visited the famous Taj Mahal in Mumbai, Chennai and Kolkata and Agra. In Delhi, he paid tribute to the Father of the Nation Mahatma Gandhi by visiting Raj Ghat. Then the Queen also addressed a gathering of thousands of people at Ramlila Maidan in Delhi.

The Queen came to India for the second time on 7 November 1983.

The second visit of Elizabeth II to India was on 7 November 1983. He was then welcomed by the then Prime Minister Indira Gandhi and the then President Giani Zail Singh. During this time he conferred the honorary honor ‘Order of the Merit’ to Mother Teresa. Then she had come to Delhi to attend the Commonwealth Countries Conference.

The late Queen then visited India for the third time on 13 October 1997. He was then welcomed by the then PM Inder Kumar Gujral and the then President KR Narayanan. Meanwhile, the royal couple had called the Jallianwala Bagh massacre during the freedom movement and called it sad. After this, the Queen and her Prince Philip paid tribute to the martyrs by visiting the Jallianwala Bagh Memorial.

Told the story of Gandhiji gifting a handkerchief to PM Modi

Prime Minister Narendra Modi met Queen Elizabeth II during his visits to the UK in 2015 and 2018. Paying tribute to him, the PM said that he will not forget his warmth and kindness. According to PM Maharani, during a meeting, she showed him the handkerchief that Mahatma Gandhi had gifted her at her wedding.

The Queen praised the welcome in India

Her warm welcome to India was highly appreciated by Queen Elizabeth. In one of his addresses, he had said that apart from the warmth and hospitality of Indians, India’s richness and diversity has been an inspiration to all of us.