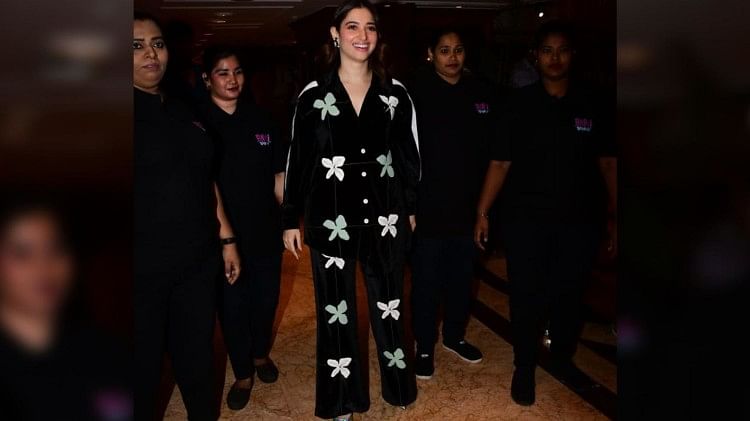 Most of the men are seen in the job of bouncer, but now slowly women are also making their career in this field. Based on this theme, director Madhur Bhandarkar has made the film ‘Babli Bouncer’ in which South’s star actress Tamannaah Bhatia is played in the lead role. The trailer of the film was launched in Mumbai on Monday, where according to the role of Tamannaah Bhatia, during the trailer launch, the woman appeared in the bouncer’s getup.

Be it hotel, club or any function or shooting. On such occasions, the activity of the bouncer is seen quite a lot. It has become more of a fashion than a security at film events. The more bouncers the star enters, the bigger the star is being considered. Even during the shooting, the stars are surrounded by bouncers. In such a situation, if Tamannaah Bhatia gets a chance, then which star will give her security by becoming a bouncer. He answered this question like this.

During the conversation at the trailer launch of ‘Babli Bouncer’, Tamannaah Bhatia told that if given a chance, she will become Hrithik Roshan’s bouncer. He took the second name of Vicky Kaushal. At the same time, she also said that she herself does not need any bouncer anymore, because during the shooting of ‘Babli Bouncer’ she has learned how to protect herself? He said, ‘To play this role, more important than building muscles was how to look strong from inside.’

Tamannaah Bhatia has been concerned from the beginning that the popularity she has got in the South. Bollywood has not got that much popularity. She says, ‘After Hindi, when I learned to work in South films, I learned the language there first, I got a lot of respect and love there. I wish that after ‘Babli Bouncer’, I get the same love and respect from the people here. The character I played in this film. He will connect more people.

Tamannaah Bhatia is seen speaking fluent Haryanvi in ​​’Babli Bouncer’. When asked whose help he took in learning Haryanvi language. She says, ‘My sister-in-law herself is from Haryana. That’s why I didn’t have much difficulty in learning the language. When I learned to speak Tamil and Telugu from the South, it was very easy for me to learn the Haryanvi language. I find Haryanvi people very unique. Have tried to do the humor that is in their culture.