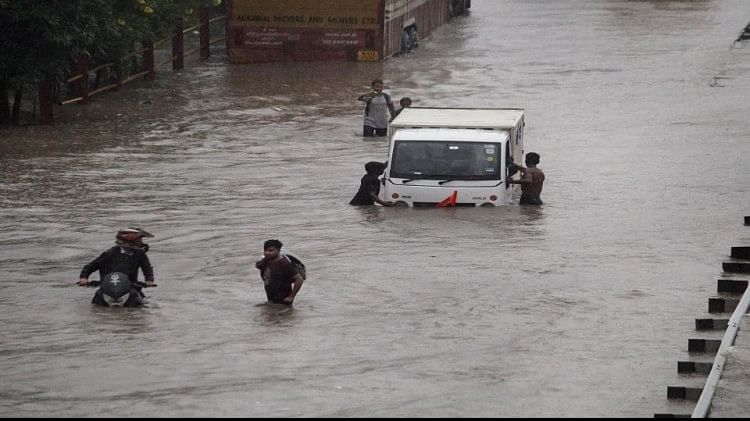 Rain still in many areas of Delhi-NCR

Weather will be bad in Himachal till September 28

Heavy rain warning in western UP and Uttarakhand tomorrow

The India Meteorological Department on Friday issued a yellow alert for rain in the national capital. At the same time, due to heavy rains, water-logging occurred at many places in Delhi and the National Capital Region. Meteorologist RK Jenamani also informed about the Orange Alert for very heavy rains in Uttarakhand for the next two days. He said that an orange alert has been issued for Uttarakhand for very heavy rains from 23 to 25 September. On the other hand, rain is expected to increase in western UP on Saturday. There is a possibility of widespread rain with isolated heavy rains over Madhya Pradesh and Haryana as well.

Meteorologist RK Jenamani said that there is a possibility of heavy rains in Uttarakhand from 23 to 25 September. On the other hand, there may be heavy rain in western UP on Saturday.

Rain in many parts of Haryana

Cyclone situation is the reason

According to Meteorological Department scientist Kuldeep Srivastava, due to the formation of cyclonic conditions at a low level over North-West Madhya Pradesh and South-West Uttar Pradesh, rain is being recorded in Delhi-NCR and West Uttar Pradesh. This condition is likely to persist in the next 24 hours as well. In such a situation, the rains will continue in Delhi-NCR.

Incessant rains in Delhi-NCR have disturbed and troubled life. Surprisingly, the monsoon is about to leave and the rain clouds are not taking the name of going from NCR. The question is, why is it raining so much at this time and how long is it going to last. The Meteorological Department has given the reason for this untimely rain and has also given information as a warning that at least today, the process of rain is not going to stop.

Uttar Pradesh Chief Minister Yogi Adityanath conducted an aerial inspection of the areas affected by the floods of Saryu river.

Due to rain, the Agniveer recruitment examination of all three tehsils of Shamli district was stopped on Friday. Now this recruitment will be done on October 11. Army officials have taken this decision in view of the bad weather. The youth was given late night entry in Chaudhary Charan Singh Sports Stadium, but the recruitment process had to be stopped due to non-stop rain at night and in the morning.

Waterlogging due to rain since morning in Gurugram

Due to incessant rains in Gurugram, Haryana, people are facing problems. The rain is not taking the name of stopping here since this morning, due to which there has been waterlogging in many places.

Traffic jam on many routes in Delhi after incessant rain.

Rain continued in many parts of the national capital on Friday morning as well. Due to incessant light and moderate rains for the last two days, traffic was affected due to waterlogging at many places in the city. IMD’s Regional Meteorological Center tweeted, ‘South Delhi, South-East Delhi, NCR (Hindon Air Base, Ghaziabad, Indirapuram, Chhapraula, Noida, Dadri, Greater Noida, Gurugram, Faridabad, Manesar, Ballabgarh) Yamunanagar, Kurukshetra, Kotputli There will be light rain or drizzle at many places in Alwar (Rajasthan) in the next two hours.